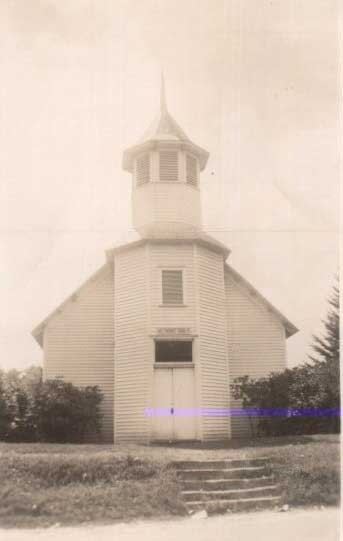 Buying the lot next to the Masonic Hall from Thomas and Harriet Parker for $250, the Methodists set out to build their building under the oversight of architect, John Z. Gottwals. “The wind played havoc with the Methodists when on two separate occasions violent gusts blew down the rafters of the new structure. The new building was heated by a large potbellied stove that stood in the center of the sanctuary. There was no basement, no chapel, no Sunday School rooms, and until the mid-twenties, oil lamps furnished the only lighting.”

Richard Melvin has letters, pamphlets, etc. that his family received during the expansion and improvement of the original “one-room” building which took place in the early 50’s. Church members received a series of letters requesting “generous contributions”. The Treasurer urged the congregation to help replenish the “Special $750 Fund” to finish the stone work, walkways, and to prepare for winter’s rain drainage. The estimated cost of the renovations/improvements was $40,000. The Conference contributed, the members contributed, and their friends contributed. The new building was dedicated in 1958. Rock work was applied to the exterior of the original building by Tom Harbison, son of Professor Harbison, in the early 50’s. In 1954, 24 pews were purchased for $75 each, hymnals were purchased for $1.65 each.

The Church opened their doors to the African-American Domestic help who were serving seasonal residents here in Highlands to worship on Sunday afternoons for about thirteen years in the late forties and throughout the fifties. To show their gratitude the folks performed an annual musical and divided the proceeds between our church for the Building Fund and the Highlands Community Hospital. A total of $625 was received.

Our church building is graced by the beauty of 16 different stained glass windows which have been donated by numerous families to honor their family and friends. There is a book available in the church office showing the windows and giving information about the donors.

Named in honor of Kate Tillet Smith, a quiet, dedicated member of the Highlands church for a number of years, who left funds “to continue the growing dream of a vibrant church for all local Highlanders and people who summer in Highlands”. Mrs. Smith’s father, Dr. Wilbur Fisk, was a dean and teacher of a long generation of Methodist ministers at the Vanderbilt School of Religion at Nashville, Tn. and her grandfather, known as “The Iron Duke” of pioneer Methodism in North Carolina was known throughout the southeast.

Our church was expanded once again in the early 90’s. An Activities Building and Sunday School rooms were added. At that time the old pump organ “which Aunt Tudie once pedaled with two feet and which in its old age had tended to cough and wheeze” was replaced by a mahogany Wicks eight-rank pipe organ with distinctly concert quality. That organ was upgraded just a few years ago to provide the instrument that we all enjoy today.

More than 62 ministers have served Methodists in Highlands through the years (included the separate congregations).

The Voice Beyond the Boat ~ January 22nd